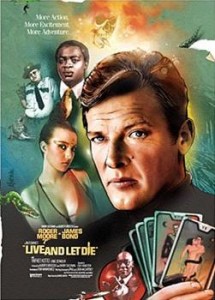 While filming Diamonds Are Forever, Live and Let Die was chosen as the next Ian Fleming novel to be adapted because screenwriter Tom Mackiewitz thought it would be daring to use black villains, as the Black Panthers and other racial movements were active at this time.

Sean Connery was originally slated to reprise his starring role but no amount of money could tempt him to sign on. The producers turned to an actor they had originally wanted to play Bond back in 1962, Roger Moore. At that time, Moore had to turn down the role because he was committed to play Simon Templar in the successful television series “The Saint”. But by time “Live and Let Die” was ready to go into production, Moore was available to take on the role. Guy Hamilton did return to direct his third Bond film and “Live and Let Die” does have a feel similar to “Diamonds are Forever”. Bernard Lee and Lois Maxwell reprised their roles as “M” and Miss Moneypenny but Desmond Llewelyn is notable for his absence, the only time “Q” END_OF_DOCUMENT_TOKEN_TO_BE_REPLACED